I decided to read Say Nothing: A True Story of Murder and Mystery in Northern Ireland, by New Yorker staff writer Patrick Radden Keefe, because a recently solved forty-year murder mystery sounded intriguing. Also, I wanted to learn something about Northern Ireland. Much of the discussion around Brexit brings up the Ireland/Northern Ireland border as a flashpoint. Why? What is the big deal about that border?

The book focuses on Dolours Price and her sister Marian. When The Troubles started in early 1969, I was 21 years old. Dolours was a couple of years younger than I. Marian was even younger. A picture of the sisters show them in jeans and mini skirt. Their photo reminds me of my Catholic high school friends — fresh-faced, full of the future.

I remember the late ‘60s and 70s as heady times. There was a great heaving movement of youth.Young people integrated public spaces and registered voters in the South. American athletes raised the Black Power salute at the Mexico City Olympics. Students at scores of universities held sit-ins and other demonstrations against the Vietnam War. Women formed consciousness raising groups and read Our Bodies Ourselves. We took the Pill. There was Woodstock, the Summer of Love and communal living. Liberation was the byword.

In Northern Ireland, young Catholics re-ignited the fight to rid Northern Ireland of British rule, to unite the island under the Irish flag. They formed the Provisional Irish Republican Army (IRA), a paramilitary group, to seize power when peaceful protests failed. Sometimes with them and sometimes against them were the old timers of the traditional IRA, who won Irish independence in the 1920s. Those loyal to the British formed their own paramilitaries. Also in the mix were the Northern Irish police, and later, the British army. The fighting lasted nearly three decades: Protestant vs Catholic, Loyalist vs. Republican, British vs Irish, old IRA vs Provo IRA. The conflict was also economic. Catholics were kept out of government and top jobs.

The de facto segregation and unequal treatment of the Catholic minority was brought home to me in an unexpected way this summer. Bill and I were watching the British Open Golf Tournament, held this year in Northern Ireland. Two people we had watched for years, David Feherty, the sports writer, and Darren Clarke, a pro golfer, both Northern Irish Protestants old enough to remember The Troubles, talked about the segregation by religion. Both said that if it weren’t for golf, they would know no Catholics.

Like the catalyzing forces of the assassinations of Martin Luther King and Robert Kennedy and the violence at the Democratic convention, the Price sisters were radicalized when a peaceful march for Catholic rights was viciously attacked by loyalists at Burntollet Bridge. A while later, Dolours and Marian joined the newly formed Provisional Irish Republican Army.

The tactics included assassinations, kidnappings and bombings. Some of the murdered were dumped in the streets as a warning. Others were “disappeared,” kidnapped and buried with no one knowing that person’s fate. Retaliation included prison, being shot by the police or by paramilitaries or by British soldiers. The worst sin wasn’t being the enemy but being an informer or “tout.”. As it turned out, people betrayed their own side with alarming regularity, and thus, the aptness and irony of the book’s title, Say Nothing.

As a member of the Provisional IRA, Dolours Price “had no intention of being relegated to a supporting role…she wanted to do exactly the same work that a man would do.” She got her wish and was swept into the spiraling violence. She killed people. She set bombs. She did jail time. She went on a hunger strike and was forcibly fed.

Dolours died of an accidental overdose in 2013 at the age of 62. Because of the physical and psychic toll of her IRA activities, and because there was no resolution or reconciliation after three decades of fighting, it felt to me like she could never outrun the consequence of youthful decisions.

For me, my life in the 70s feels like someone else’s life. I rode in the middle seat of a 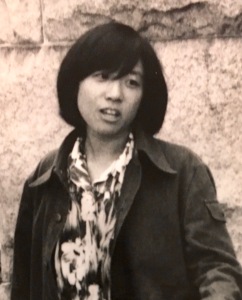 friend’s Ford Pinto to one of the big anti War marches in Washington. I handed out leaflets and was told by a young man to “Go back to where you came from.” I did not burn down the Washington University ROTC building, despite Bill’s joking claim. I lived in a commune. I farmed for the first — and last — time. My response to gender equality was to go to medical school.

My political leanings haven’t changed much, but I support them with checks these days. And climate change has taken the place of the anti-War fervor.

Reading Say Nothing, made me wonder. What if I had chosen a more radical route? What I had fallen under the thrall of some charismatic leader, like Gerry Adams for Dolours? I remember that feeling that all things were possible, the thrill of making a difference. Some in our country did turn to violence and made decisions that turned out to be irrevocable: the Weather Underground, the Symbionese Liberation Army, the Black Panthers.

The official end of The Troubles, the Good Friday Accords, did not resolve much, legally, morally and most of all, emotionally. Northern Ireland sits like a scab that could break open at any time. And that murder mystery? By the time the big reveal came, I had given up caring. By that time, nothing could make up for the lost lives, the warped survivors, the grieving families, the orphans, the betrayals, the suffering.

Tell me: What were your young adult passions?

I am a doctor, a writer and Grammy to Edin and Caleb. I live in St. Louis with husband Bill. View all posts by cathyluh