We all have an image of what our “best” life would look like. Mine would include having a perfectly supportive husband, eternally appreciative children; insightful conversations and gourmet dinners with friends; disciplined daily exercise and writing routines; and a wildly successful blog. Before I retired from doctoring, smart and considerate co-workers were important.

So, if that’s my perfect life then how is it that I am writing this essay slouched on my 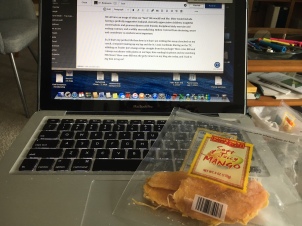 couch, computer heating up my lap and the St. Louis Cardinals blaring on the TV, nibbling on Trader Joe’s mango strips straight from the package? How come Bill and I always eat dinner with plates on our laps, him reading his phone and me watching PBS News? How come Bill was the only viewer on my blog site today, and I had to beg him to log on?

Guido Brunetti, a police detective, has the life I dream of. In this long running

mystery series by Donna Leon, I have accompanied Guido at home and at work. I have met his family, his co-workers and his superiors. I have been with Guido walking through Venice’s maze of streets and alleys, many of them dead-ending at the water’s edge. He and I have ridden the vaporetti and the police boats in the canals and lagoons. I have fallen asleep with him while reading Thucydides, Pliny, Aeschylus and Sophocles.

As a native, Brunetti’s mental map of Venice is based on landmarks like churches, palazzos, bridges and vaporetto stations, never street addresses. Pictures of friend Larry and Bill in 2004. Notice they are holding maps! 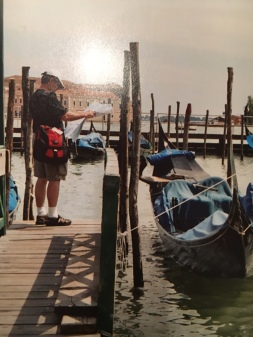 In the Temptation of Forgiveness, Leon’s 27th novel in the series, Guido investigates an assault. His team consists of fellow detective Claudia, young, smart and intuitive, and Lorenzo, his long time sergeant. The three have an easy companionship. They speak frankly among themselves, freely floating theories and making jokes. The boss’s secretary is an ally to Brunetti and a force to be reckoned with. Brunetti’s bosses, Lieutenant Scarpa and Vice-Questore Patta, are vain, lazy and sleazily ambitious.

Brunetti spreads a wide net in search of the assailant. When he interviews the vicitm’s wife, she balks at further questions, asking, “What good would it do?”

“He [Brunetti] realized that finding the guilty person would do no one any good at all and never would. It would do bad to the person who had committed the crime and to their family.”

“’It is not my job to do good, Signora,’ he admitted. ‘Only to find the guilty person and see that they are arrested.’”

His search for a motive and a culprit lead him to uncover many sordid schemes his greedy fellow citizens are foisting on the vulnerable. He is more disappointed than surprised. Of course, in the end, he unravels the who and the why. He always does.

Whether or not the perpetrators of crimes in Venice are brought to justice, a sometime-slippery concept, is hard to predict. Forces outside of Brunetti’s control –political considerations, financial clout, social position — often hi-jack the expected “crime and punishment” sequence in a city and country rife with corruption.

Brunetti is dogged in his pursuit of criminals, but he is also philosophical. He finds solace, and sometimes instruction, in reading Greek and Roman classics. In The Temptation of Forgiveness, he is reading Sophocles’ Antigone. The heroine, Antigone, defies her uncle Creon’s ruling that her brother’s body must be left to rot. Her sister Ismene says, “We must submit to the law.” Antigone breaks the law in the service of a higher code and buries him. She pays with her life. Brunetti considers the ramifications of unjust laws on those whose job is to uphold the law.

While reading, he banters with his wife, Paola, who is also reading. He says to Paola, “Ismene tells me that ‘We are mere women, and we cannot fight against men.’” Paola mockingly replies, “So I’ve always believed.” She does not even look up from her book.

Brunetti has two teenage children, a boy and a girl. These days, they meet mostly at mealtime. Everyone delights in Paola’s cooking: gnochetti di zucca (squash gnocchi), spezzatino (stew), ciambella (bundt cake) with raisins and pumpkins, chestnut and hazelnut cake. Paola is such a richly wrought character, a professor of literature, a devotee of Henry James, someone who can hold her own in any conversation so I don’t even mind that she does all the cooking.

It is not the actual circumstances of Brunetti’s life that I want. Yes, Venice is beautiful but I know it’s overrun with tourists. They clog the streets. The cruise liners pollute the lagoon. The tourists skew the local economy by raising restaurant prices and causing the stores to be filled with “Made in China” kitsch.

Clearly Brunetti enjoys the intellectual aspects of being a detective. He likes his co-workers. But work is challenging too. And his superiors are cretins. And his enemies are numerous and powerful: industrial polluters, human traffickers, drug smugglers, corrupt politicians, and plain old bad guys (and gals).

What I want when I say that I want Brunetti’s life, is to emulate his emotional center. To capture some of his grace and equanimity. To enjoy family and friends. To keep doing my best without guaranteed results. To find beauty and humor in everyday situations. To appreciate good literature. To savor, as Brunetti said while opening a bottle of Collavini Ribolla Gialla to sip while reading Antigone “the different sensations that life could offer.” Oh, and maybe Paola’s cooking too.

Tell me: Which Fictional Character’s Life Do You Want, and why?

I am a doctor, a writer and Grammy to Edin and Caleb. I live in St. Louis with husband Bill. View all posts by cathyluh

2 thoughts on “The Life I Want”